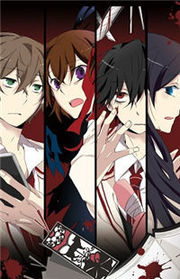 A story based off of the "Shuuen no Shiori Project", a song series by 150P and Suzumu. The stories are based off of Japanese children's games and urban legends such as one-man hide and seek, doppelgangers, mearry's phone and monkey paw. On the normal, unchanging campus, it suddenly occurred; A murder case where a body was cut open, right into two. On the other side of the unsolved case, the rumor-loving high school students became involved in a certain ritual. From the extremely popular songs on Nico Nico Douga, begins the Project. What is the “Bookmark of Demise”…? Who is the traitor…? What will the conclusion to this story be…? So, can you solve this mystery?
Show All
Lastest Chapters