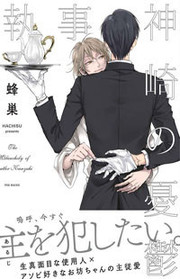 From xiaojiangworld : Kanzaki is an extremely competent butler. Fluent in 4 languages, skilled in martial arts and works for the prestigious Tachibana family. The only thing that causes him concern is the sole Tachibana heir, Itsuki. Itsuki, who enjoys sex and doesnt mind who he beds, one day also extends an invitation for Kanzaki to be held by him. Having held onto romantic feelings for Itsuki for so long and witnessing him in such a seductive state, Kanzaki reaches his limit. His feelings of lust and want runs wild!
Show All
Lastest Chapters